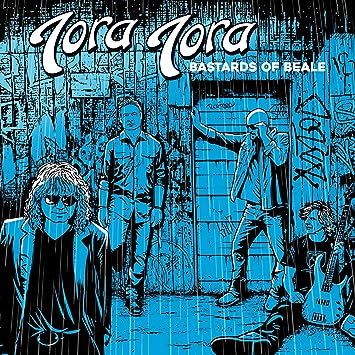 Tora Tora are a hard rock band that formed in Memphis at the tail end of the 80’s unfortunately sandwiched between the Glam acts and the heavy hitting Grunge bands soon to come. While they did have some minor hits and fairly strong albums with “Surprise Attack” and “Wild America”, they never saw much more than a cult status and soon folded after planning a third album that never was released. However with the recent onslaught of more obscure acts returning with full-fledged reunions, the time seems right to give this little Bluesy Hard Rock group a second chance and the market seems ripe for their return. Finally in early 2019, we are seeing the next chapter of Tora Tora entitled “Bastards of Beale”.

Right away the band come out swinging with the heavy Bluesy hard rock sound they reveled in when they first formed. We see opener “Sons of Zebedee” keeping a refined melodic rock sound all the way through its chorus all the way to the very upbeat “Silence the Sirens” which is one of my favorites here. Another major highlight is “Son of a Prodigal Son” which has an almost vintage country stomp to it with driving acoustic guitars against heavier electric guitar riffs. The production I also have to say fits the bands character as well. Every instrument is mixed evenly together and still are able to give off a garage band sort of vibe where everything still feels loose and organic. Songwriting-wise, the arrangements are very simple in their execution but hold a lot in terms of feeling and that can be heavily attributed to Anthony Corder’s soulful voice. Besides a lot of other standout rockers such as “Rose Of Jericho” and the swaggering title track, we also get some softer sides such as “Lights up the River” which absolute shines. It adds more to what is already a terrific rock solid album.

Honestly, this album is one of the major early highlights of the year and it is a totally unexpected one. While I love when bands expand their sounds to new musical heights, sometimes it is great to just put on a simple rock record with song after song of catchy hooks to keep you coming back for more which is what you exactly get here. Tora Tora have released a record in 2019 that’s a statement showing that straight forward rock n roll ain’t dead and that they aren’t either and are here to show the kids how to do it right.